To share your memory on the wall of Hubert Larocque, sign in using one of the following options:

“Death ends a life, not a relationship.” –Mitch Albom

Funeral arrangements pending at this time.

We respectfully ask at this time that COVID rules be applied and attendance be for family only.
Read Less

To plant a memorial tree in honor of Hubert Larocque, please visit our Heartfelt Sympathies Store.

Receive notifications about information and event scheduling for Hubert

Donations are being accepted for:
Our Lady of Good Counsel Heart and Stroke Foundation

We encourage you to share your most beloved memories of Hubert here, so that the family and other loved ones can always see it. You can upload cherished photographs, or share your favorite stories, and can even comment on those shared by others.

Kathy and Chris Healey and family

3 trees were planted in the memory of Hubert Larocque

5 trees were planted in the memory of Hubert Larocque

Posted Mar 10, 2021 at 02:14pm
My memories of Hubert go back along ways from when i was a small child and he would come and visit grandma. He and Margaret always stopped on their way home. From time to time i would see him at ma'tantes or when mom and i were driving thru town on our way home. He was a very special man and i was always impressed with the things he had done. A very creative person for sure.
love hugs and prayers.
Nancy Giesbrecht-Calgary
Comment Share
Share via:

Posted Mar 06, 2021 at 07:12pm
It is with great sadness that I write this condolence letter wishing his family and friends my deepest sympathy and regrets on the
pasting of Hubert. My memories of Uncle Hubert are always of happiness and good times. As a little boy, I remember Uncle Hubert as bigger than life itself. He took me to see the Sonny Liston and Cassius Clay (Muhammad Ali) flight when I was about nine and he had to sit through the movie gone with the wind just to see the flight. Hubert was tall man and I looked up to him as a young boy. As I grew into a man myself I could look my uncle in the eye but I still looked up to him, I admired him. He set an example for me to follow. He was a man who took on challenges and won them.

My mother told me about an incident when Hubert was 7 or 8 years old. She had been told to baby sit him and Hubert had climbed out through the upstairs bathroom window onto the grand meres entrance roof. She went outside yelling at him to get down as he could kill himself. Hubert jumped around the roof and suddenly slipped and fell onto ground. Hubert lay on the ground not moving and my mother ran over to him to help him but he didn’t move a muscle. She ran across the street screaming to the neighbours that Hubert had hurt himself and they came running back but Hubert was no where to be found. He was hiding somewhere laughing at the joke he had played on his sister. There was always a twinkle in Hubert eye and he brought a lot of joy and love to many many people.

I phoned him when he was in the hospital in Toronto and tried to keep his spirits up. I asked him, how many people he knew had dug their own basement by hand. He answered me saying he only knew one person whom had dug his basement for his house by hand and that was him. That is right there is only one like Hubert and he will be missed by many many people.

Posted Mar 04, 2021 at 10:40pm
Gigi and family, sending you much love & strength during this difficult time. Our thoughts are with you. Love Christy & Quenton
Comment Share
Share via: 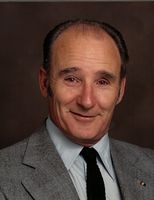