To share your memory on the wall of Vinton DeGagne, sign in using one of the following options:

In lieu of flowers donations can be made to the Riverside Foundation for Health Care "Rainy Crest Long Term Care Activation Center" where Vinton had been residing, being well cared for by many, or the Heart & Stroke Foundation. C/o Northridge Funeral Home, Box 89, Emo, ON P0W 1E0
Read Less

Receive notifications about information and event scheduling for Vinton

There are no events scheduled. You can still show your support by sending flowers directly to the family, or planting a memorial tree in memory of Vinton Mathieu DeGagne.
Plant a Tree

Donations are being accepted for:
Heart and Stroke Foundation Rainy Crest Activation Program

We encourage you to share your most beloved memories of Vinton here, so that the family and other loved ones can always see it. You can upload cherished photographs, or share your favorite stories, and can even comment on those shared by others.

Posted Jan 16, 2021 at 10:21am
Dear Murray and Rhonda, I'm sadden to hear the passing of your father. Please accept my sincerest condolences to you and the entire family. May your father rest in peace. Doriano (Spud)
Comment Share
Share via:
MG

Posted Jan 14, 2021 at 02:50pm
To Arlene and Family,
My sincerest and deepest sympathies on the passing of Vinton, prayers and thoughts are with you all at this time.
Have often thought of you through the years.
God Bless and may you find comfort in your memories.

Posted Jan 10, 2021 at 04:10pm
Vinton was a skilled welder who worked hard to provide for his family. His work ethic was well known. He and his brother Leo built cottages in the same bay on Rainy Lake; our kids enjoyed so many pleasures of lake life because of their fathers’ dreams! The best memories are of swimming, boating, barbecues, bonfires and simply being together.
I am saddened, but take some comfort in knowing that Vinton’s pain and struggles are ended. May your spirit be at peace.
Janis
Comment Share
Share via: 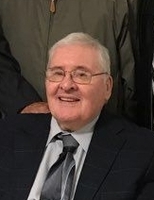