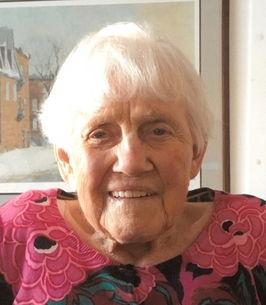 It is with great sadness the family wishes to announce the passing of Verenia Rosa Zucchiatti 96, on Saturday July 23, 2022 at Rainycrest Home for the Aged.

Verenia was born on September 8, 1925 in Fort Frances, to Buster and Clara Saunders.

She is survived by 3 sons Joe (Brenda) in Delta,. B.C., Jim in Calgary, Alberta and Don (Amy) in Fort Frances and numerous grandchildren and great-grandchildren.

Verena was a hardworking caring person. During the war she worked full time and donated blood so often that she became anemic and could no longer donate. After marrying dad she looked after some cottages at the point park that she rented out with dad’s help when he wasn’t working. That lasted a few years. For many years our parents owned a second house that was turned into a rooming house that mom rented rooms out in. We had two large gardens to look after. As if that wasn’t enough in the late 60’s she started volunteering, first with the Christmas suppers, then the Legion Ladies Auxiliary, the Hospital Auxiliary and day care. An avid bridge player she ran, with her sister Eloise Camirand, the Marathon Bridge Club as well as played in 3 other clubs. With all that she always had time to help us kids out in any way.

Growing up we have many special memories, spending every weekend at the cabin with her parents Buster and Clara. Saturday night is where we learned bridge and other card games.

Many thanks to Dr. Moorhouse and the Rainycrest staff for their care and attention.