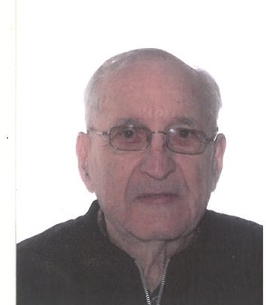 With heavy hearts we announce the passing of our father Stanley Sockolotuk on July 12, 2022 at Rainy Crest Long Term Care Home at the age of 95.
He was born on June 27th, 1927 in Fort Frances, Ont. To William and Elizabeth Sockolotuk. Dad had married the love of his life, Alice “Jennie” Ossachuk in 1950 on January 20th. They raised 4 Children.
As a young child he lived in Mine Centre Ont. until the age of 9. In 1936 the family then moved to Stratton for two years and finally settled in Fort Frances, Ontario.
In his later years, Dad began his working career at the Fort Frances Times as a type setter. His last 26 years of his printing career was spent working at the Falls Daily Journal from 1964-1970.
All this time Stan and Jennie were already making drapes at home as well Dad was teaching himself Upholstery, and yes he still dabbled in painting business out of the basement. Both parents then decided to venture into their own home decorating business in 1970. The business offered carpet installation, drapery products, paint and of course upholstery. It was a multi-tasking business.
Throughout his life, Stan loved his sports. In late 50’s he pitched in the senior league as the powerful under handed softball position. He threw the ball so hard, that to this day, his “back catcher” Stan Zajac said his hand would burn after every catch. Not only could he hit the ball, but hit home runs! In early 60’s they played a game in Baudette MN. After every home run made, the players would win a box of Wheaties. Dad brought home 5 boxes that day. He was the best home run hitter in the district. He not only loved his baseball, but he had a passion for curling and golfing. He was again a power house when he hit that golf ball.
In 1970’s to early 80’s he purchased land up on Wreck Point Road, Bears Pass so he could build a cabin. It was enjoyed by all who ventured up there. After a rigorous day at the business, Mom and Dad had a place to unwind.
Dad involved himself with the Rotary Club for many years and became President 1984-1985.
Mom and Dad loved their vacations in Hawaii, but cruises were not that exciting! Dad loved to hunt moose and deer with his son Stan Jr, son in law Andy, cousin Larry Patrick and his son Jon Paul.
He was predeceased by his parents, William and Elizabeth, his wife Alice “Jennie”, his son Rae (1970), siblings; June Wodell, Mamie Soderholm, Jack Socholotuk, Alex Socholotuk, plus all of his in Laws.
He is survived by his children; Janis (Andy) Lesko, Thomas and Stan Jr. (Karen) Granddaughters; Myriah Lesko of London England and Lindsey (Romel) Merana of Kenora, along with his great grandson Nakoa and his brother Garry Socholotuk of Kenora, along with many Nieces, Nephews and friends.
Dad and Mom instilled in their children a legacy of perseverance and hard work. Stan Jr. is a testament to that work ethic with 52 years in the business this year. Dad was proud of your stamina and work ethic Stan, and also all of his children who contributed to their Legacy.
Leave this lonely world of ours and escape the sorrow and the pain, when you cross over to the other shore there will be peace forever more. Your heart is pure and your soul is free and you will soar to the heavens and find the light that be. The endless journey has just begun! Your family loves you Dad! Rest in Peace! Vechnaya Pamyat!
A Graveside Service will be held on Friday, August 12 at 1:00 p.m. at Riverview Cemetery in Fort Frances with Dianne Clifford officiating.
If friends desire, donations in memoriam may be made to The Alzheimer’s Society or Canadian Cancer Society by cheque C/o Northridge Funeral Home, Box 89 Emo Ontario P0W1E0
Online Condolences may be made at www.northridgefuneralhome.com