Obituary for Rosella May Galbraith 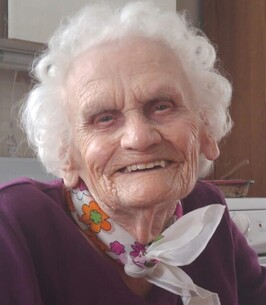 Our family would like to honor the life of our mother, grandmother, great
grandmother and great great grandmother, Rosella May Galbraith who lived
life to the fullest for 101 almost 102 years until her passing on Nov 14, 2022.
Rosella lived her whole life in the Devlin area and cultivated a love for
farming at a young age as it was her responsibility to tend the cows and other
animals on her grandmother’s farm. There were also turkeys but she said she
disliked tending to them.
As a teenager, Rosella enjoyed music, singing and dances. At sixteen
she first met a young man named Albert.
AN EXCERPT FROM ROSELLA’S MEMOIRS; “In the summer of 1937, I started
going with Albert Darrah who was working on the railroad in Barwick and was
driving his own car without a top “open air” we called it. He started driving by
our place and started calling in, I guess he had his eye on me. We dated until
we were married May 24, 1939”.
Albert and Rosella worked hard on their family farm and together raised
four sons and one daughter until Albert’s sudden passing in 1970. Now a
widow, Rosella pursued her school bus license as a source of income, but she
was grateful for the help she received from family, friends and neighbours to
keep the farm going. In 1972 she married Allan Galbraith and together they
continued farming and driving school buses. Driving the school bus was very
rewarding, she often spoke of “Her Kids” in turn, “Her Kids” often spoke of the
“Yodeling Bus Driver” as she became affectionately known. Music was always
a part of Rosella’s life and she could be counted on to play the piano or
accordion and she did so obligingly with expressive eyebrows and a bright
smile on her face.
After Allan’s passing in 2005, Rosella continued living at their home in
Devlin. She was strong willed and stubborn, even into her late 80’s she could
be seen hoeing in the garden early in the morning, weeding her beautiful
flower beds or feeding her birds and of course this would all be done in her
bare feet.
Because she started her life with little means she was always grateful
and appreciative of what she had, this was evident in the way she treated
people. Whether you knew Rosella for your whole life or only a few short days,
you received the same genuine kindness and love as her own family,
affectionately being called “Her Boy” or “Her Girl” and always being welcomed
with a warm embrace. Friendships were important to Rosella and she always
made an effort to keep in touch by letters or phone calls, she really enjoyed a
good chin wag. In her later years, Rosella found reading to be one of her
favorite pastimes and could often be found with a book in her hands. She
especially enjoyed reading the Bible, as her life centered around her faith and
love for her creator Jehovah.
She will be greatly missed but fondly remembered by all her family and
friends,her children Leo and Nicole, Velina and Steve, Leonard and Candice,
Martin and Twyla, as well numerous grandchildren, nieces and nephews.
Rosella was predeceased by her loving husbands, son Sidney and five
grandchildren.
A memorial service will be held on the Zoom app.and announced at a
later date.