To share your memory on the wall of Robert Gosselin, sign in using one of the following options:

Bob will be lovingly remembered and missed by his wife Pat, of 58 years. He will also be missed by his children Lorraine (Rob), Bob Jr. (Terri), Larry (Marcia), and Linnette. Bob had a special place in his heart for his grandchildren Kelsey, Janelle, Jessica, Shanna, Alexandria, Malarrie, Autumn, Payton, Sarena, Ethan and Marissa. As well as his great grandchildren Kaylyn and Lucas. He will also be missed by his siblings Fred (Evie), Elaine, Joyce (Jim), Keith (Joanne), and in-laws Joan, Flora, Shirley ,Allan (Lorraine), Evelyn (Fred), Stella (Don), Gail, Bob (Karen), Ron (Charlene), Doug (Patti), and countless nieces and nephews.

Cremation has taken place, and due to Covid 19 restrictions there will be no service.
In lieu of flowers, in memoriam donations can be made to the Atikokan General Hospital or the charity of your choice c/o Northridge Funeral Home Ltd., Box 89, Emo, ON P0W 1E0.
Read Less

Receive notifications about information and event scheduling for Robert

We encourage you to share your most beloved memories of Robert here, so that the family and other loved ones can always see it. You can upload cherished photographs, or share your favorite stories, and can even comment on those shared by others.

We are so sorry to hear about Bob passing away and disappointed that we can't come up to be part of a celebration of his life. I have fond memories of coming up there every other year when I was growing up and spending time with you and all the rest of the family. My Dad really enjoyed talking with Bob and the rest of the men and would often reminisce later about the fun they all had together shooting the breeze and telling tall tales. My Mom, Pat, misses you and the rest of her siblings and would have loved to see you, even under these terrible circumstances. She frequently speaks with me about wanting to go back home one last time, but she's past being able to travel now and won't be able to make that trip no matter how much she would love to.
All our condolences,
David Atkins, on behalf of Anne (Shirley) and my family Cheryl, Iain and Alexander 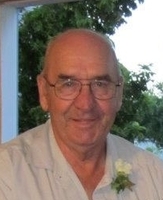