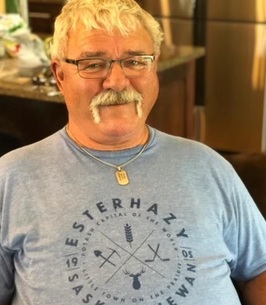 It is with heavy hearts that our family announce the passing of our dad, Rick.
Rick grew up on the water. Whether it be fishing, boating, house boating, hunting, flying, guiding, sledding he always found an excuse to be on the water. He knew the lake like the back of his hand. He knew how to get anywhere on Rainy and knew where more rocks were than the map makers. He found many of them the hard way over the years. Rick could also get anywhere by snowmachine in Northwestern Ontario. He spent many years grooming the snowmobile trails volunteering for the snowmobile club.

He ducked out of high school a few years before graduation but didn’t exactly kick his feet up. He was always working somewhere and was never afraid to try new things. He worked on his gramma’s farm from the time he was a little boy, as he got older, he spent time as a houseboat guide, then got into construction, working at the Caland iron Mine in Atikokan. He could run any piece of equipment and loved his logging trucks. He hauled wood to the mill in Fort Frances for many years before making a change and trying out the tourism business with Phyllis and the boys as camp manager at the Tip Top Lodge fly-in fishing and hunting camp. It was one of the best summers of the whole family’s life. Things ultimately didn’t work out so he decided to get back into trucking, this time deciding to see the continent delivering paper all over North America. Eventually he had the opportunity to try something new when his favourite uncle Kenny bought a sawmill in Ignace. Rick ran the mill for a few years until Kenny sold the mill. At that time Rick again took another leap and bought a feller buncher. He was back in the bush cutting the trees he used to haul and saw. He owned a few bunchers over the years mostly cutting for his buddy Les Christian. As he was getting close to retirement age he decided to sell the buncher and take an another adventure and head out to the oil sands and run some big equipment in Fort McMurray. Eventually being away from Fort so much wore thin and he decided to head back home and get a little closer to retirement. Still not willing to fully retire he would take on occasional work running backhoe or driving truck for Veert or Armstrong. He also loved to return to his childhood farming roots and help out friends with harvest or seeding or whatever needed being done from the seat of a tractor.

Rick and Phyllis were married on December 4th, 1971, and they just celebrated their 50th wedding anniversary.

He can be remembered fondly for the nicknames he came up with for those close to him, (but he didn’t always like those nicknames made in return). Squeak, Sea-Hag, Magpie, Bonehead, Jam Tart, Puppy, Trapper, Mister, and Scruffy to name some.

A memorial service will be held on Friday July 22, 2022 at 11 a.m. from the La Place Rendez-Vous, Fort Frances, Ontario.

In lieu of flowers a donation may be made to a recreational club of your choice.