To share your memory on the wall of Petrus Smits, sign in using one of the following options:

Print
It is with deep sadness that the family of Peter John Smits, age 93, announces his sudden and peaceful death in his home at Meadowside Manor in Stratton, Ontario on March 17, 2021.

John was born in Sheho, Saskatchewan on October 22, 192... Read More
It is with deep sadness that the family of Peter John Smits, age 93, announces his sudden and peaceful death in his home at Meadowside Manor in Stratton, Ontario on March 17, 2021.

John was born in Sheho, Saskatchewan on October 22, 1927. His family settled in Fort Frances during the depression years and John started his working life when he was fourteen years old. On August 28, 1951 he married Juliette Audette and in 1956 they moved to Stratton when he bought his father’s farm.

Over the years, John worked in many industries. He established the first artificial insemination business in the west Rainy River district and the improved quality of the local dairy herds was a direct result of this venture. Sheep farming replaced dairy farming at the same time John established his construction business, but when disease destroyed the flock he settled into full-time construction (locally, far north, and past Thunder Bay). Many houses, barns, commercial buildings, docks, and inns remain as a legacy of his construction years.

John officially retired in 1987, although he periodically took on special, smaller projects for his family, the recreation council, and the church. He was an avid curler and a well-known figure in the district (and especially at the Country Corner Café), where he was proud to make his home.

John’s life was supported by three strong, fundamental values that acted as his pillars: family, faith, and friends. He was loving, empathetic, compassionate, resourceful, and giving, with a reputation for getting things done. He was a caring and loving husband to Julie, his partner of almost 70 years, a devoted father of 7 girls, and a role-model for his grandchildren and great-grandchildren. He balanced a deep seriousness with a strong sense of humour and play, and will be greatly missed.

John was predeceased by: his parents, Harry and Anna Smits; his sister Jeanne (and her husband Vic) Belanger; his brothers Laurent (and his wife Doris) Smits and Harry (and his wife Lorraine) Smits; the late husbands of his surviving sisters, Ike Balcewich, Jack Dillon, and Ross Anderson; his son in law, Robin Malcolm; and various parents, brothers, and sisters in law, namely Joseph and Delima Audette, John and Lucille Audette, Andre and Helene Audette, Bernard Audette, Alma and Ed Haver, and Jan Audette.

A private (due to Covid restrictions) funeral mass will take place on Friday, March 26, 2021 at Our Lady of the Way Catholic Church in Pinewood, Ontario; with internment at Immaculate Conception Cemetery in Stratton, Ontario.
Read Less

Receive notifications about information and event scheduling for Petrus

We encourage you to share your most beloved memories of Petrus here, so that the family and other loved ones can always see it. You can upload cherished photographs, or share your favorite stories, and can even comment on those shared by others.

Posted Mar 30, 2021 at 10:45pm
Oh, how sad to hear of Johnny's passing, and kind wishes to the family. My mother and father were Graig and Valerie Boileau; they were neighbours of Johnny and Julie in Atikokan during the sixties, I think. I remember when Johnny and Julie would come over to the house, and all you could hear was laughter and raised voices. Our parents talked about 'Johnny and Julie Smits' and their seven daughters on many occasions through the years, and although I was just little when they moved away, they made a lasting impression....
Comment Share
Share via:
J

Posted Mar 26, 2021 at 01:40pm
There was so many great and memorable memories with my grandfather he was a very kind man and always welcomed everyone with open arms of unconditional love he was a hard worker and very selfless I myself have gain a lot of those same characteristics while spending a lot of my childhood with him and my grandma. I would spend a lot of time wondering around the property with my grandpa he would always let me go into the wood workshop and help him make lots of beautiful items I was so amazed what he could achieve out of wood what a true craftsman and had a eye for detail. I will always Cherise the moments I have spent with my grandpa and forever will i kept those memories close to my heart. May knowing that he was greeted with unconditional love and peace in heaven as this will bring us all much warmth in our hearts.
Comment Share
Share via:
DL

Posted Mar 24, 2021 at 05:44pm
I’ve been sitting here all week trying to find the right words to say and I’ve decided to start cause it could take a while. I will always cherish the times I spent with gramma and grandma when I would go there for a week or two. Grandpa showed me a love for building small crafts to big things. He had a great way of getting people together and making them feel welcome. I’m grateful my kids got to know him and go to the White House has Pia and Davis call it. I’m blessed to be called David John and my son being Davis John. We will always remember you and forever miss you. I love you
Comment Share
Share via:
LJ

Posted Mar 21, 2021 at 09:34pm
As I gaze out my window and contemplate my memories of dad they are like looking at the stars the more I gaze the more I remember. Dad’s love for us was unconditional and was expressed through his actions if not always in words. Dad loved his family and was deeply devoted to mom. Family meant everything to dad his girls, their spouses, his grandchildren and great grandchildren held a special place in his heart. He celebrated our successes, supported us in our defeats, was always there to lend a helping hand and advice when asked. Dad taught me that faith, kindness, generosity and humor are the stepping stones upon which to find fulfillment. I treasured our trips to Kenora for his appointments, as my mom can confirm he always had to be at least half an hour early for any appointment so we would leave an hour earlier than necessary. Some of my fondest memories from my youth were going to auction sales, trips to the Fort with a stop at DQ, working with dad in the shop, building tree forts, his love for horses but how he would never ride them himself. Dad and I always ended our phone conversations and visits with “I love you”. Now I will end mine with “I miss you.”
Laura
Comment Share
Share via:
AZ

Posted Mar 21, 2021 at 06:55pm
Dad,
I have so many great memories of you during my life. I knew from an early age I was your sports daughter. The strong bond that we shared went from watching Saturday night hockey games , curling, and our love of football. Yes we were betting buddies.
You always encouraged us to do our best and be proud of our accomplishments. Dad you and mom taught us to be strong , independent (some would say stubborn) caring individuals.
You loved and were generous with your woodworking projects. My children enjoyed the back yard tent structure you created along with wood puzzles, birdhouses and many others.
Dad thank you for all your support over the years. I know you will be watching us from above. You can count on your daughters to support mom and each other. I will miss you.
Love your daughter Anne 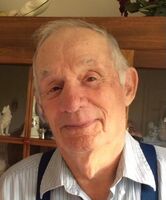 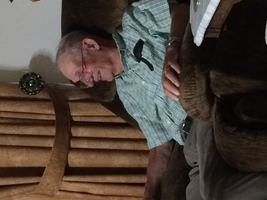