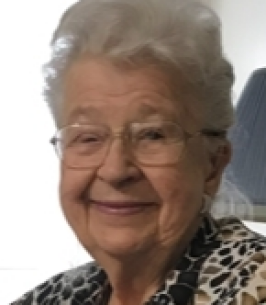 With great sadness the family of Joyce Ann (Tolen) Albright announce her sudden passing on July 27, 2022.
Joyce Ann was born January 29, 1933 in Gameland, ON. She was the daughter of John and Anna Tolen. She attended Pratt School, then Rainy River High School.
Joyce had a great love of animals, at one time she had a pet groundhog.
In 1950 Joyce married Earl Sandmoen. They had one son Wayne.
In 1956 they moved to Niagara on the Lake. Joyce and Earl settled on a street facing Lake Ontario in the town of Niagara on the Lake. Joyce did a lot of volunteer work, as well as part time work as a cashier.
In June of 1973, Earl and Joyce were invited to attend the Queens Dinner at the Pillar & Post Inn as a reward for their volunteer work.
In 1974 Joyce became the Front Desk Manager at the Pillar & Post Inn in Niagara on the Lake.
In 1976, Joyce married Peter Albright. In 1977 they bought Muskie Bay Camp in Nestor Falls. They operated the camp for 16 years. In 1993 they sold the camp and moved into their retirement cabin on Crow Lake. They spent the summers at Nestor Falls and the winters in Niagara on the Lake.
For the first 10 years of retirement, they travelled a lot, including a trip to Sweden to visit Joyce’s relatives.
In 2012, Peter went into a retirement home and Joyce moved in to the Golden Age Manor in Emo, to be closer to Wayne and Ann.
Joyce was predeceased by her parents John and Anna Tolen, brother Victor and his wife Dorothy and Wayne’s father Earl Sandmoen and husband Peter Albright.
Joyce is survived by her son Wayne (Ann) Sandmoen, and stepchildren David (Heather) Albright, Lynn (Bryan) Lawrence, Cathy Bell and Mariann Albright, grandchildren Myndi (Erin) and her children Jacob & Katie, Michael (Sonya) Beaushene and David – James Lawrence and his daughter Grace Megan Bell, Jonathan (Cheryl) Lawrence and their sons William and Alexander Lawrence, Cassie and Mason Albright, and nieces Sandra (Jim) Hogan – Cynthia (Rick), nephews Gary (Joy Anne) Tolen and Brad (Doreen) Tolen. Also, Earls remaining family – special is his sister Sandy, and sisters -in-law Mary de Montmorency, Lena Bellingham and Margaret Bogie.
Joyce had many friends, two very special friends from her teenage years are Bob and Vivian Locking.
Graveside service to be held in Blue Cemetery on Tuesday, August 9, 2022 at 11:00 a.m.
If desired, memorial donations in Joyce’s name may be made to the Riverside Foundation by cheque, c/o of Northridge Funeral Home Ltd., Box 89, Emo, ON P0W 1E0.