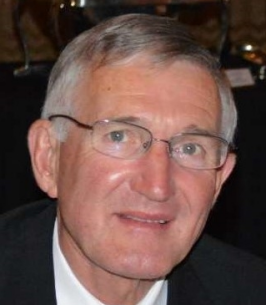 The family of Jack Allen announces his passing at La Verendrye Hospital on Tuesday July 19, 2022.
Jack was born at Mrs. Fulfords in Emo, on October 1, 1942 to the late Harold and Mildred (Millie Tibbs). Jack lived in Devlin until his marriage to Elaine Anderson on 14th September 1968.

Jack started work at a very young age: his first job was picking up nails for his uncle Len who was doing roofing, then he went to work for Fred Greensides at his store in Devlin. Bringing sacks of grain from the Devlin train station to the store After graduating from high school he worked for Forsberg and Lindberg, that is where Jack got his first taste of being a salesman When the opportunity arose, he started working in the local paper mill. Started in 1962 and retired 40 years later in 2002.He held many positions while there, but when he was allowed the opportunity to take a bulletin with the maintenance department as a rigger, Jack had found his calling. He loved to climb and never had any fear of heights.
Jack loved attending stock car races and cheering on his team – the Detroit Red Wings. Jack was very proud of his sons and supported them in all their endeavours. Always attending their hockey games (a very silent hockey dad).
In 1972 Jack decided he should go into sales again. So along with working at the mill he became the Electrolux sales and service man. Travelling the countryside, enjoying viewing the farms and visiting with many of the residents, getting a sale was a bonus.

Funeral service will be held at Fort Frances Knox United Church on Wednesday, July 27, 2022 at 11:00 am.
Luncheon to follow service at the McMillan Hall (lower level).

Interment to be in Riverview Cemetery following reception.

In lieu of flowers memorial donations may be made by cheque to the Kenora/Rainy River Alzheimer’s Society, Knox United Church, Rainycrest Auxiliary or charity of choice, c/o Northridge Funeral Home Ltd., Box 89, Emo, ON P0W 1E0.