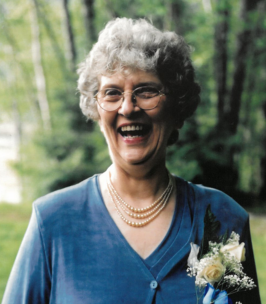 It is with heavy hearts that the family announces the passing of Elizabeth Jean (Betty) Robinson
age 83, who passed away at La Verendrye Hospital on November, 3, 2022.

She was born April, 2, 1939 in Roddick,ON to Cleve and Julia Wilson. Betty lived in Thunder Bay where she attended the Port Arthur General Hospital Nursing Program, graduating in 1959. During her stay in
Thunder Bay she met her husband Gordon E. Robinson who she married in 1961 after moving to Dryden, ON. Betty spent 15 years working at the Dryden Hospital, and in 1965 welcomed a new family member, Betty and
Gordon’s son Darryck.

Betty, Gordon, and Darryck moved to Sioux Lookout, ON in 1975 where she worked for Canada Post from 1976-2004, until her retirement. In 2005 she moved to Fort Frances to be closer to her family and help her mother Julia in Rainycrest, Home for the Aged, whom she doted on until her passing in 2015.

Betty was an avid gardener, like her mother, and took great pride in her flowers and gardens. She also loved to knit and everyone in the family has something special made by her.

Betty also had a love for bowling, bingo, and cards, spending many hours at the bowling alley and Sister Kennedy Centre, where she made many friends and memories that she cherished very much. Over the years she also enjoyed pastimes such as puzzles and volunteering at Rainycrest.

A Celebration of Life will be held on Monday November 14th from 11:00AM-1:00PM at the Fort Frances Royal Canadian Legion followed by sandwiches, dainties, coffee and tea.

Betty’s burial will take place in spring of 2023 with a small family ceremony at the Riverview Cemetery
in Fort Frances.

Donations can be made in care of Northridge Funeral Home, Box 89, Emo, ON P0W 1E0 to the Heart & Stroke Foundation.

The family would like to make a Special Thank You to Dr Laxton for all his care and support, and to all
the staff at La Verendrye Hospital.