To share your memory on the wall of Douglas Bourre, sign in using one of the following options:

Receive notifications about information and event scheduling for Douglas

Print
To be held at a later date.

We encourage you to share your most beloved memories of Douglas here, so that the family and other loved ones can always see it. You can upload cherished photographs, or share your favorite stories, and can even comment on those shared by others.

Posted Feb 21, 2021 at 09:52am
I have so many wonderful memories with Uncle Doug; most of them involve being out at the cabin. As a city kid, I remember thinking it was such a special place and I was so lucky to get to visit it. So many fishing trips, fish frys, fires, and of course just being able to swim. Who can forget the trips to dump fish guts at the rocks - I even loved that. I even remember one of my first times on water skis and Uncle Doug actually trying them out too; the whitest legs I ever saw! Lol
There were also the Christmas’s or New Years Eve’s that we spent going snowmobiling around the house property.
Thank you for all the amazing memories; love you so much and miss you!
Amanda (Bourre) Smeets
Comment Share
Share via:
DG

Posted Feb 20, 2021 at 01:41pm
I remember years ago when he tried to teach me how to water ski. Have terrific loving memeories of the Bourre family and the cabin.
will always love and miss you Uncle Doug.
Denise Graham
Comment Share
Share via:
DR 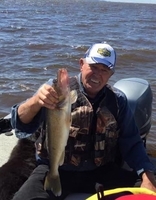