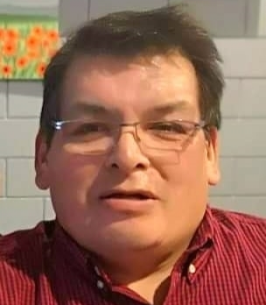 It is with profound sadness that the family of Derek James Horton announces his sudden passing on November 5, 2022, in Rainy River First Nations.

Derek was born on December 10, 1972, to Berla and Robert Horton. He grew up on Manitou Rapids/ Rainy River First Nations with his older brother Marcel and younger siblings Tammy, Darryl, and Heather. In his early years, Derek attended Sturgeon Creek School, Our Lady of the Way School, and graduated from Fort Frances High School in 1991. Derek expanded his formal education attending programs at Seneca College, Algonquin College, and completing local training in Heavy Equipment.

Derek was a devoted, helpful son and a doting older brother. He placed great importance on caring for and supporting his younger brother and sisters. Family was important to Derek and he lit up around his nephews and nieces, always ready to play and make them laugh. In 2005 life changed for Derek when he reunited with his high school sweetheart, Laura, and they began a family together. In November 2007 they were overjoyed with the birth of their son, Edward. Derek’s focus became his family, raising his little boy, being a stepdad to Taryn, building a home and enjoying a quiet life in his community. Derek was a hard worker and kept busy at various jobs within the community, including positions at Manitou Forest Products, the Water Treatment Facility and as part of the Community Maintenance team. Derek was also a proud, active member of the Manitou Rapids Fire and First Response team for many years, which provided him with an opportunity to further serve his community.

Derek enjoyed participating in events that held special meaning to him and supporting local charities. He could be found volunteering and raising awareness for issues he held dear, accepting challenges such as the Polar Plunge and annual Cuts for Cancer.

Those who had the opportunity to know Derek, knew of his fun-loving demeanor, his sense of humor, his kindness, and his easy going nature. Derek loved time with friends and family. He enjoyed golfing, bowling, fishing, going to the casino, and family game nights. He was a Rubix Cube wiz, great at fixing electronics, and always ready to try his hand at general repairs and building. He enjoyed a good road trip, was ready for an adventure, and didn’t shy away from hard work. If he could help, he would, and those close to him knew they could count on him to be there when needed. Derek's calmness under pressure, his ability to laugh and find joy amidst difficulty, and his willingness to give what he had to help out made him a friend anyone would be proud to have.

Derek was many things to many different people - a caring son, a loving partner and father, a dedicated stepfather, a supportive brother, a carefree-funny uncle, and a humble free-spirited friend. He left a lasting example of the joy, laughter and love that can be found in the simpleness of life and his memory will live on in all who had the pleasure of knowing him.

Derek is survived by his high school sweetheart and love of his life, Laura Cridland, his son Edward, his step-daughter Taryn (Davis), along with his mother Berla, brother Marcel (Lisa), sisters Tammy (Kevin) and Heather, nephews Haiven, EJ and Trapper and nieces Trinity, Grace, and Dawnas, uncle Joe (Florence), aunt Liza, cousins Curtis and Kristi, many extended family and close friends and his fur-buddy Chester.

If desired memorial donations for the family may sent to by EMT c/o Laura Cridland to loladabowla@hotmail.com . Arrangements entrusted to Northridge Funeral Home.