To share your memory on the wall of Dennis Huntley, sign in using one of the following options:

Born in Rainy River in 1942, Dennis lived the majority of his life in Fort Frances. He was proud of his community and of the Northwestern Ontario forest. In his early years, Dennis enjoyed spending time with his many friends and cousins. He excelled at sports, particularly hockey, and had fond memories of his time spent at the outdoor rinks. In 1962 Dennis met his future wife Grace Tardiff. The two were engaged on Christmas Eve, 1963 and married on September 19th, 1964.

Dennis worked mainly in retail through his adult life enjoying a long period of employment with Canada Safeway from 1977 until his retirement in 2002. He valued the relationships he had with the people he worked with and as well, he valued the interaction he had with community members through his work.
Our Dad was a loyal husband and devoted father. Having a family was his greatest joy in life. When we were small, it was a usual occurrence to find our dad outside organizing a baseball game for the kids in the neighbourhood. He was a ‘hands on’ dad that was involved in all of our activities. His passion for hockey coupled with his love for children made him a wonderful hockey coach for many years. He spent weekends with us either at home or in the bush fishing or hunting partridge, or even just walking in the forest. As we grew into teenagers, he was always present for hockey and football games and band performances. He was so proud of our successes, whether big or small, and during the times that we made mistakes, he was always there to catch us and turn us back in the right direction.

As proud as he was of our accomplishments, our moving away was a difficult transition for Dad. We attended post-secondary education, married and began our families and our Dad was once again fully alive as grandchildren came into his life. He loved his grandchildren with his whole being and he left with them traits that can be seen in all four of them today.
If there is one trait that our Dad will be most remembered for, it will be his smile. He had a smile that could light up a room.

Dad’s life changed dramatically with the onset of dementia. He was diagnosed with Alzheimer’s approximately 4 years ago. Although watching his decline was difficult, our family is thankful for the opportunity to realize the value of “the little things in life”. We are thankful for the support and kindness of family, friends, and service providers that helped us significantly to navigate our way through the dementia journey.
The care and compassion shown by the staff at Rainycrest will always be remembered. They became a second family to Dad in the last year of his life.
A Celebration of Life & Funeral Mass will be held in St. Mary’s Church in Fort Frances at a later date when it is safe to gather again.

In lieu of flowers, donations may be made to the Kenora/Rainy River Alzheimer’s Society or to the "Riverside Foundation for Health Care for the Activation Department", or the Rainy Crest Auxillary by cheque, c/o Northridge Funeral Home, Box 89, Emo, Ontario, P0W 1E0.

“By the end of the day I realized that the empty, missing part of me was overflowing with you. There are some tears but in some strange way, they fill me with a calmness. Your body is at rest, the physical pain has stopped, but I feel as though a part of your spirit lingers on with every life you touched. In peace, at last”.
Read Less

Receive notifications about information and event scheduling for Dennis

Donations are being accepted for:
Alzheimer Society of Kenora/Rainy River Districts Riverside Foundation for Activation Program

We encourage you to share your most beloved memories of Dennis here, so that the family and other loved ones can always see it. You can upload cherished photographs, or share your favorite stories, and can even comment on those shared by others.

Posted Dec 30, 2020 at 08:27pm
Hello Michelle - and family, I am very sorry to hear of your father's passing just a few days before Christmas . Yes - what a wonderful smile!

Allan and I were deeply saddened by Dennis’ passing. We valued our friendship when living in Fort Frances .
You will miss him and he will always live on through all the memories you have shared.
Dennis, Rest In Peace.
Comment Share
Share via:
HB

Posted Dec 24, 2020 at 02:06pm
Our sincerest sympathies to Grace, Adrian, Michelle and their families. We enjoyed our visits with him He was a wonderful man, husband, father and grandfather. He will be dearly missed but will live on in our memories. 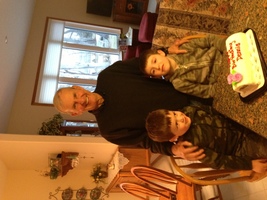