To share your memory on the wall of David Loney, sign in using one of the following options:

Receive notifications about information and event scheduling for David

Print
A Zoom service will be held at a later date, to be announced. A link to an on-line celebration of his life will be available on Emo Devlin Knox United Church Facebook site at 2 pm on Sunday February 7, 2021.

We encourage you to share your most beloved memories of David here, so that the family and other loved ones can always see it. You can upload cherished photographs, or share your favorite stories, and can even comment on those shared by others.

Posted Jan 30, 2021 at 01:37pm
Our thoughts and prayers to your family. He was such a kind man who meant so much to our family as we settled into life in Canada. He will be missed.

3 trees were planted in the memory of David Loney

3 trees were planted in the memory of David Loney

Posted Jan 29, 2021 at 10:00pm
I've been an employee for almost 26 years at Cloverleaf and I remember many of Dave's stories either in the milk cooler or in the store itself. Whenever he saw me he always had a kind word and something to tell me. You will be missed Grampa Dave as we called you over the years. You were a great person great friend and great boss yes you will truly missed by us all.

Posted Jan 28, 2021 at 11:39am
M. Loney David George is one of the best persons we have met, he was full of love, joy and more than proud of the others around him. We enjoyed the incredible neighbour he was and all what we shared together in our peaceful town in Emo, speaking some French, everything, he was an awesome man and grandpa for our kids. He will be deeply missed, may his soul rest in perfect peace 🙏. McKenzie family
Comment Share
Share via:
SS

Posted Jan 27, 2021 at 04:05pm
Dave was one of the best that Emo offered! Kind words great conversation. He will be missed Vince and Shirley Sheppard.
Comment Share
Share via: 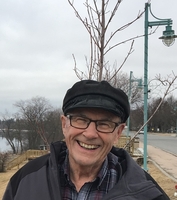