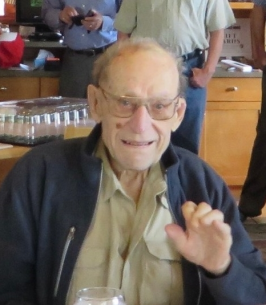 It is with great sadness that the family of Bruce Johnson Caldwell, 96, announces that he passed away peacefully at La Verendrye Hospital on Wednesday, August 3, 2022 with his wife Lois at his side.
This great man, husband, father, friend, and mentor was born on April 24, 1926 in Napanee, ON to Pearl (Davis) Caldwell and John Murdock Caldwell. Bruce graduated from Napanee High School and as a young man worked at Gibbard Furniture Factory in his hometown.

In 1953, at the age of 27 Bruce left Napanee to accept a job with the provincial Lands and Forests Department (later MNR) to work at the Fish Hatchery of the day in Sault Ste Marie, ON. The Sault Hatchery, revamped in the 1950s, featured outdoor cement ponds and was able to provide 600,000 fish each year.
In 1954, Bruce was transferred to Lands and Forests in Fort Frances and that spring, early in the ice break up, Bruce was camped on the shores of Northwest Bay as he and his co-worker Don Galbraith had set and were monitoring a box net to collect walleye spawn. One evening, a local Indigenous fisherman paddled through the leads in the ice to the camp. As they played cribbage together, the man spoke enthusiastically about the lake and its environs. Hearing of Bruce’s origins in Napanee, ON, the fisherman said, “Once you taste the water of Rainy Lake you won’t want to return to southern Ontario.” Bruce tasted the water that day and he never left, making this beautiful region his home for the rest of his life. We his family are so very thankful.

Through mutual friends, Bruce met and eventually dated Lois Drennan. They were married August 23,1958 and they danced and travelled through life together for almost 64 years.
Bruce continued as a Conservation Officer, attending several further training sessions at Ontario Ranger School in Dorset, ON. He rose through the ranks until the early 1960s when he was appointed District Fisheries Management Officer. He and his colleagues monitored all aspects of the Rainy Lake fishery, aquatic wildlife, and water quality. He was a pioneer conservationist of fish management and had the unique opportunity to observe Rainy Lake’s evolving ecology including the mystifying disappearance of Golden Shiner minnows, and the arrival of invasive species like Rainbow Smelt. Bruce and his team were the first to document the presence of Mooneye, a relative of the Goldeneye, in Rainy Lake at Spawn Inlet and Seine River. Bruce was integral in initiating water testing on Rainy Lake. In the late 1960s he and his staff helped create a systematic way to do lake water testing that included depths, oxygen, and chlorophyll not practiced before.
After 30 years of dedicated service to fish management and conservation

Bruce retired January 1, 1984 at the age of 58 and eventually took up a position with at the Fort Frances Airport as a “ramp rat”. He loved his Fort Frances community from Day One and gave back tenfold. He spent many years in retirement as a volunteer on various Town boards including the Economic Development Committee and the Fort Frances Museum. Bruce also gave much of his time volunteering with the Fort Frances Aquanauts as a Starting Official. His love of airplanes was the catalyst behind the numerous Fort Frances Airshows and “Fly-In/Drive In BBQ’s” in the 1990s, which he organized and was very passionate about. His love of the outdoors spilled graciously and wisely upon his two children, Beth and Jay, and his legacy for loving the land and the water carries on.
Bruce is survived by his wife Lois Caldwell; daughter Beth Caldwell and her partner Thane Grewatz; son Jay Caldwell and his wife Tanice Marcella; five grandchildren, Megan, Colleen, and Heather Zachozy, Amanda Caldwell, and Dustin Holtz; and six great grandchildren Adam Parks, Bentley Bragg, Julie Parks, Harley Bragg, Wyley Bragg, and Charlie Rydoell. Also left to cherish his memory are niece Carol Sinclair, and nephews Ian Sinclair, Scott Caldwell, and Roger Duncan. Bruce also is survived by his half brother William (Bill) Caldwell and family and stepbrother Neal Harrington.
Bruce was predeceased by his parents, sisters Barbara Caldwell, Sue Sinclair, Janie Alkenbrack, brother Joe Caldwell, stepbrother Pat Harrington, nephew Bradley Sinclair, and mother and father in-law Florence and Joe Drennan.

In lieu of flowers, because Bruce received such good care from staff at
La Verendrye Hospital, Bruce’s family asks that you consider a donation to to Riverside Foundation for Health Care, 110 Victoria Avenue, Fort Frances, ON P9A 2B7.
Rest in peace Bruce, for your “Circle of Life” unfolded in a beautiful journey.

Please copy and paste the following link to view the memorial service on Friday 11 a.m..CST