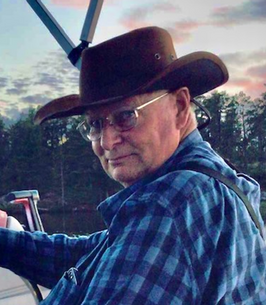 Allan Burritt Brown
August 06, 1942 - November 06, 2022
Allan “Al” Burritt Brown -Loving Husband, Father, Grampa and Friend of many- passed away unexpectedly on November 06, 2022 at the age of 80, at his home in Nestor Falls, Ontario.
Allan was born on August 06, 1942, the youngest child of Mildred ( nee Swire ) and Earldon “Burritt” Brown of Emo, Ontario. As a boy he attended Elementary School in Emo, until his Father took the position of “Highway Patrolman” and moved the family to Nestor Falls in the early 1950’s. He then attended Nestor Falls Public School and Fort Frances High School.
As a young man Allan worked as a Guide for several Hunting and Fishing Camps in the area. It was while he was employed at Red Deer Lodge, that a petite brunette named “Shirley Pearson” from Bergland, Ontario caught his eye.
Shirley and Allan were united in marriage at “The United Church” in Rainy River, Ontario on January 11, 1963. Later that year they welcomed their first Son, Colin Burritt into the family. A few years later they were blessed with another Son, Lance Allan.
With a young family to support and raise, Allan began a life of working hard to provide for his family. With a variety of jobs, such as; hunting and fishing guide, as a labourer for Hydro, fireman at Lands and Forests, a crewman for the MTO and doing carpentry work.
Over the years Allan started many successful businesses. One of the first businesses he created was in “Waste Management” AKA The Garbage Man. He also started the septic tank cleaning business he named, “Falls Sanitation.” In the early 1970’s Allan, Shirley and the young boys moved to Sioux Narrows, Ontario to become the Proprietors of “Allan’s Meat Market.” A grocery store, with Al as the head butcher. The boys would often tell stories of how well they ate. Big steaks aged to perfection and more chocolate milk than they could drink!
The 1980’s brought a new chapter to Allan’s talents. As the owner of the construction company, “A&S Burritt Enterprises, with him as the General Contractor. He and his Sons built mansions, homes, cottages, docks and everything in between. Such as being the caretakers of numerous cottages, plumbers and snowplow operators.
You can find his craftsmanship throughout the Town of Nestor Falls, and it’s many beautiful lakes. He will not only be remembered for his “Builds,” he also taught many young men how to become skilled carpenters themselves, while being part of his crew.
Allan was also very involved in his community. Over the years he contributed his time to many organizations, clubs and committees. He was one of the first members of our “Local Services Board,” a Past President of the “Nestor Falls Lions Club.” A member of the “Moose” lodge in Baudette, Minnesota, and a former Mason. For 19 years he proudly served as a “Volunteer Ambulance Attendant” and driver.
Allan was preceded in death by his parents, Mildred and Burritt Brown, In-Laws, Lilly and Rudolph Pearson, his eldest Son, Colin Brown, Brother Earldon “Earl” Brown, Brother In-Laws Gordon Marsh, Dave Bragg and Sister In-Law Marita Brown.

Those left to cherish his memory are Allan’s loving Wife of 59 years, Shirley Brown,
Son Lance [Lori] Brown,
Grandson Clint Brown (Jodi Sinclair),
Granddaughter Samantha Brown (Wes Dutson),
Daughter In-Law Sheila Brown (Scott Lundy),
Granddaughters Miranda [Rob] Paterson, Carlee [Mason] Gallinger
Great-Grandsons Ryder, Sylas, Colt and Taylor
Also left to mourn are his Brother Roy [Marilyn] Brown, Sisters Edna Marsh (Chuck Halverson),
Reverend Eileen Bragg and Sister In-Law Gladys Jolicouer. Along with many Nieces and Nephews of “Uncle Al” and so many dear friends from his hometown, the Rainy River District and the USA.
He was a kind hearted man, who was always willing to help. His visits were quick and he always had treats for our dogs. Allan loved spending time with his family. He truly enjoyed going fishing with his Grandchildren and the Family moose and deer hunts. He also grew a great garden and loved to share its bounty.
He loved travelling with Shirley, to places like Alaska, Florida, Mexico, Burritt’s Rapids, Ontario (a historic town named after his family) and Casino trips to Minnesota. Or simply taking his “Bride” partridge hunting in the side by side. At family shore-lunches out on the lake or gathered around their dinner table, there was always lots of food, stories and love.
The family will be celebrating the life of Allan Burritt Brown on Friday November 18, 2022. The service will be held at The Royal Canadian Legion in Emo, Ontario from 11:00am to 1:00pm.
Honorary pallbearers will be Roy Brown, Tom Jenior, Laird Tomalty, Dr. Jeff Gorman, Dave Prochaska, Ross Advent and Paul Perrin.
If friends so desire, Memorial donations may be made to “The Heart and Stroke Foundation” or a charity of your choice.