To share your memory on the wall of Alfred Benjamin, sign in using one of the following options:

Print
It is with heavy hearts that the family of Alfred Stillman Robert Benjamin announce his passing on December 1, 2020 at the La Verendrye Hospital in Fort Frances, Ontario after a courageous battle with cancer.

Alfred was born in Emo Ontar... Read More
It is with heavy hearts that the family of Alfred Stillman Robert Benjamin announce his passing on December 1, 2020 at the La Verendrye Hospital in Fort Frances, Ontario after a courageous battle with cancer.

Alfred was born in Emo Ontario to David and Matilda Benjamin on August 28th, 1940. He grew up in North Branch with his eight siblings.

Alfred spent most of his younger years working in the bush before he met the love of his life June Witherspoon in Atikokan. They married August 25, 1961 and were married for 59 years. Alfred had a large circle of friends who were all dear to him. He was a very loving family man who was proud of his sons and daughter and all of his grandchildren. Later in life he enjoyed farming and would spend much of his time tending to his animals and all the chores around the farm. He also loved planting his garden every year and so many of his friends and family enjoyed the fruits of his labour, he was always proud of how tall his corn was. Alfred loved to kid around and tease, he was always quick with a joke. His great sense of humour was known by everyone.

No funeral services will be held as it was Alfred’s wish.
The family gratefully requests that in memoriam donations be made to The Palliative Care Room at Riverside Health Care Foundation 110 Victoria Avenue, Fort Frances, ON, P9A 2C1.
Read Less

Receive notifications about information and event scheduling for Alfred

Donations are being accepted for: Riverside Foundation for Health Care (Pallative Care).

We encourage you to share your most beloved memories of Alfred here, so that the family and other loved ones can always see it. You can upload cherished photographs, or share your favorite stories, and can even comment on those shared by others.

Plant a Tree in Memory of Alfred
Plant a tree 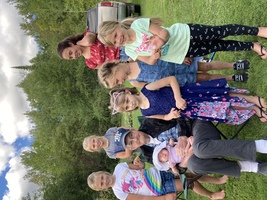